Savvy Students have their say: archaeology at Berkeley


For many 1st year students this is the first time they have ever been on an archaeological excavation. The Social Media Team interviewed students to see how they were feeling, what they were expecting coming onto this dig and their aspirations for the coming weeks. The purpose of these interviews was to gain understanding of what it is like to come onto a site such as Berkeley and to learn the skills needed for future archaeological endeavours. 1st years were already well aware of Berkeley from the various talks given throughout the year, but as Henry said, apart from this morning his knowledge of the Berkeley dig ‘was limited’. Catherine said the tour from Dr. Stuart Prior definitely helped, ‘it allows you to place the dig in context. I look forward to moving on from the site preparation and actually digging’. The 1st years were looking forward to get stuck in and ‘getting a grip on what practical archaeology is really about’. Overall, spirits seem high, and the general consensus amongst the 1st years is that they cannot wait for the real digging to begin and the finds start being discovered. 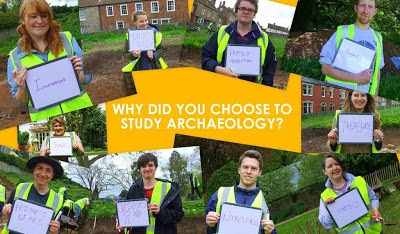 For 2nd and 3rd years this was not their first time at Berkeley. In fact, they had already gained practical experience out in the Paddock, where the first years are now digging. The students said they were excited to get digging when they were in 1st year but were surprised as to how naive they were – work was harder than they expected! Equipment they thought would be easy to use, such as the shovel or trowel, turned out to be much more difficult than anticipated. The 2nd and 3rd years felt this year’s dig would be a great opportunity to apply skills learnt from the previous year, and were looking forward to the increased responsibility. ‘Using dumping levels in the field is good. It reaffirms everything we learnt in the classroom,’ Alex said. Students have definitely grown more attached to their ‘trusty trowel’ since 1st year; most students said it was their favourite archaeological tool. Gabby said ‘My trowel has my name on it. Its name is Marshall’. Students also commented on the contrast of today’s gleaming sun to the torrential storm that pervaded the last day of last year’s dig. 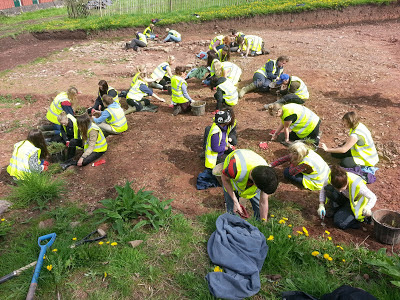 Students hard at work in the sunshine

Boosted by the unusually fine weather, everyone was reared up to compete for the prestigious role of digger-of-the-day (DoD for short). Alex said ‘I’m fired up - where is my mattock! I will use hard work and graft,’ while Mick said ‘there is no second place only first place.’