As the first two weeks have passed in Berkeley, Gloucestershire, the University of Bristol archaeology students are half way there, and we begin our final two weeks. Much has happened on the site this year, and to give a general overview on the beginning of the excavation and the upcoming end, I have spoken to site leaders at both the Paddock and Jenner garden.

The Paddock site leaders: Stuart Prior and Sian Thomas 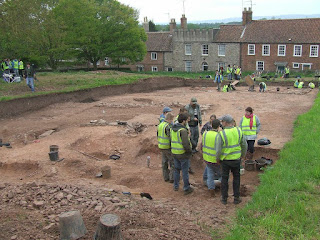 We have learnt that the Anglo-Saxon building is actually Saxo-Norman; it has two phases, first Late Saxon then Early Norman. Underneath the Saxo-Norman building is unquestionably Anglo-Saxon. We have also discovered that the Norman building in the north west corner of the trench has an identical plan to Robert Fitzharding’s 12th century house in Bristol, however the Berkeley building is of a smaller size. Fitzharding rebuilt Berkeley Castle and his further generations still reside there today. He also founded St. Augustine’s Abbey in Bristol, which later became Bristol Cathedral.

We are hoping to finish digging the medieval pits and the fill of the Anglo-Saxon ditch and finish excavating the Saxo-Norman phase of the building in the centre of the trench. We are also holding out for some summer sunshine in our final working days!

What is the general consensus of the Paddock’s site?

From our excavation and historical documents we can see that the site has been intensively occupied since at least the Roman period, as we have features ranging from Late Roman to Post-Medieval. There is little depth separating each period certifying Berkeley’s important market town role. However over the past couple of hundred years the function of Berkeley has been greatly changed, the river trade dried up as the River Seven shifted course. Yet the town was rejuvenated in the 1950s when a nuclear power station was built, consequently it has been decommissioned. Since then Berkeley has remained how it is today, a small but beautiful town in Gloucestershire. 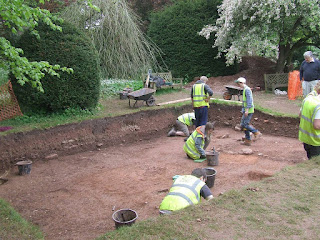 We have uncovered a section of ditch which has been excavated in previous trenches over the past three years. We believe the ditch is of early Saxon date although it contains a lot of Roman material. A possible slot for a beam is also being excavated which may point to a small wooden building standing on the site. There is also evidence of later construction work as mortar mixing platform has been discovered in the corner of the trench.

What is the general consensus of the Jenner Garden site?

We will be continuing excavation of the ditch and building feature, this has created more mystery in the actually purpose of the site and if there is one. We are so continuing an in-depth excavation and exploration of the possible mortar platform.

Unlike the Paddock it is uncertain if there was a solid use of this site and what it could be. We have dug through the post-medieval and medieval layers and are now working on an earlier period. The Jenner trench is potentially a Roman industrial site which was evidence of Norman construction.