Downpours begin as the site develops

Posted May 09, 2013
The sky was a tad more overcast today but this did not dampen our spirits as we got ready to get stuck into the real digging. The Berkeley excavation has been buzzing with activity; there are now two more test-pits in addition to the work going on in the Paddock and Jenner Garden.

The rain from the night before helped us to do a really good clean up of the trenches. In the morning we finished off the final de-weeding in the Paddock and by lunchtime we had started cleaning up the Norman house and the hearth of the Anglo-Saxon house in order to continue with excavation.
For the first time we launched a Ground Penetrating Radar (GPR) test in the Paddock, although still in its very preliminary stages it could potentially be a good way to test for more Norman houses. 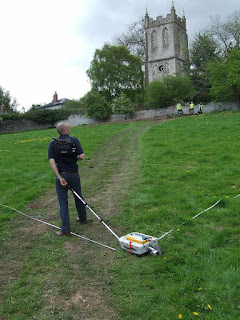 In the Jenner Garden the team worked hard mattocking and shovelling, we reached through the bottom of the rubble layer that defined the eastern edge of a ditch known to run from previous trenches.
Last night Dr. Stuart Prior addressed 60 people at the Annual Friends of Berkeley Talk in the Great Hall of Berkeley Castle- everyone was very appreciative and keen to hear what we had found so far! In the packed out hall, amongst the audience was John Berkeley, the Owner of Berkeley Castle and his son Charles, who is likely to inherit the castle. Friends of Berkeley are all looking forward to the tour of the excavation and to the revealing of the finds in Week 4.

The Social Media team were on top form as usual, we ventured out into the field to ask students why they wanted to study archaeology and their favourite archaeological time period. The students held up cards with their answers, we received a variety of responses-

We’ve also been preparing briefs for our tours for members of the Public next week, we have found lots of fun facts about Berkeley Castle to entertain and engage people.

Dr Stuart Prior said ‘I’m really excited to see what we find, but I hope to God it doesn’t rain!’
Luckily for the diggers, the rain held off until the end of the day- fingers crossed for tomorrow! Please remember to follow us on any our many multi-media platforms, and we have now set up our very own Berkeley YouTube Channel.