Posted May 28, 2013
Paul Blinkhorn has been developing his expertise in Anglo-Saxon & Medieval pottery since 1983. After completing his Archaeology degree at Bradford, he spent two years on the digging circuit before making the jump into the detailed study of ceramics. To date, he has looked at some two and a half million sherds. Paul visited the University of Bristol’s archaeology project at Berkeley this May and sat down to talk to us about his love of pots, archaeology and his work on Time Team. 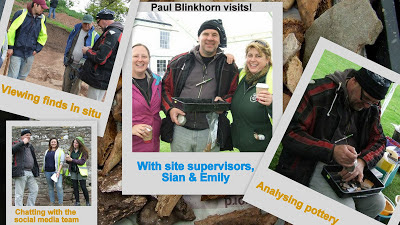 Tell us about your experiences on Time Team?

I got onto that completely by accident. They were digging a Saxon monastic site in Norfolk. At the time I was doing a research project for English Heritage on Ipswich Ware (a standard type of Saxon pottery) when Andrew Rogerson, the county archaeologist, said "come on up on day three and have a look around". So I was wandering round the site with him when I got into one of the trenches where this huge tray of pottery was. I started picking the sherds up, talking a bit about them, when the film crew came thundering over the horizon and said "would you like to say all that again in two minutes forty-five seconds?" It was ten seconds before I was on when they said "you do know this is going out live to two and half million people...and three...two..." About three days later I got a phone call from Time Team who had come across my scene during the editing and said "who is that guy?" And that was the problem...nobody knew who I was! Luckily, Andrew told them and they managed to track me down and sign me up.

What is the relationship between Archaeology and the Media and how has it changed in recent decades?

Well certainly, it has changed a lot. You look back to the 1960's, with programmes like 'Chronicle' and things like that which were fantastic - sadly I'm old enough to remember things like that! In fact it's partly Mortimer Wheeler's fault that I became an archaeologist. In those days it was very much 'an archaeologist walking around talking about stuff or visiting digs'. Then Time Team came along with the television companies who were actually funding the digs - which was a completely new concept. And then there were various attempts to copy Time Team, for example Time Flyers etc. But it's become too expensive to continue broadcast excavations in a television format - not just because of the dig itself, but because of the layers of staff and TV crew required to make the episode. Now, it seems to have gone full circle, back to the days of Chronicle, etc. Most of the archaeological programming being made now comprises an archaeologist, or more often and slightly annoyingly, a historian, wandering about in front of things talking....or standing there dramatically with their hair blowing in the breeze. The plus point is that this format is much cheaper, with one film crew, a presenter and a bit of graphics.

What are your thoughts on the pottery discovered at Berkeley?

Most of the sherds have been bog standard medieval pieces, as was expected. Many of the types are exactly the sort of stuff you find in Bristol or Gloucester. Most of the pottery's come in from places like Ham Green, Redcliff, or Bristol itself.
It's when you get into the Saxon period that things get really interesting. Obviously the Saxon phase at Berkeley is one of the most interesting aspects of the site, as well as being my particular period of interest too. We've found a couple of sherds of middle-Saxon Ipswich Ware which are 8th to 9th century AD. There are only two other find-spots of this Ware in Gloucestershire which are Winchcombe (a royal minster) and another which was a salt-mine exporting salt in these pots to places like Southampton. Ipswich Ware seems to be tied up with the salt trade. This pottery is travelling a long way and its presence at Berkeley is clearly an indicator of high status activity, even if the pottery itself is not high status. This is one of the key pieces of evidence in establishing Berkeley as the site of a high status Minster, rather than merely an expansive dwelling.

How valuable do you think this project is to the Bristol University students who are digging here?


They're incredibly lucky. They'll probably find it difficult to appreciate just how good a site this is purely because they're just not experienced enough in Archaeology yet. The first dig I ever did was with my dad when I was fourteen on holiday and we ended up scratching about as volunteers on top of this blasted bit of limestone pavement near Ingleborough. We were digging a stone house foundation and I was scratching away at where the door would have been. This site turned out to be the only excavated rural Viking farmstead in mainland Britain at the time! I was so obsessed with the digging side of things that I didn't quite realise the importance of the site itself. Looking back and knowing what I know now, I would love to dig one of those again. The compact clayey soil at Berkeley looks absolutely horrible to dig, but it is good practical experience for the students. 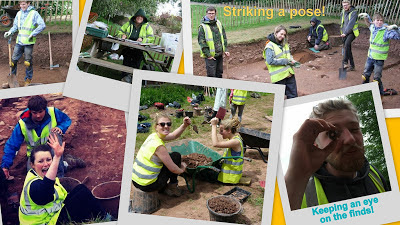