Posted May 29, 2018
For third years, the dig is no longer a compulsory part of their degree. Those who have returned to the dig this year do so because of their love for the project, and the great memories associated with it. As we begin the third week of excavation, we asked third year students to reflect on their time at the Dig Berkeley project, and share some of these memories. Having been involved in the project over the last three years, they had a lot to share, from favourite memories to most challenging tasks. 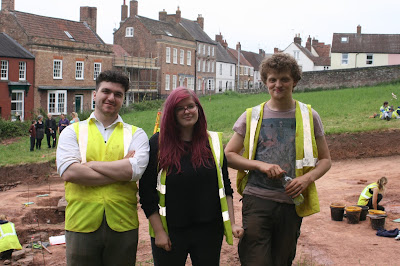 Public Engagement Officer Hattie says her best memory of the project was getting to bond with people over hard work; coincidentally she said that she found this most challenging but at the same time it strengthened friendships. Hattie says Berkeley is a great site to work at because of its many layers of occupation, meaning there is always something new and exciting-or, as Hattie put it, "old and exciting"-to be found. Managing the project's Public Engagement team has developed Hattie's love for making archaeology accessible; she believes "heritage belongs to everyone". For Hattie, Berkeley will always be the place which cemented her passion for archaeology.

Volunteer digger Dan says he has enjoyed digging at Berkeley because he likes working outside, particularly in the countryside. He says his favourite memory was of getting a bit too much sun in his first year of excavation, and not being able to stop laughing all afternoon, while his biggest challenge has been learning to remember all the archaeological terminology. Dan says he feels lucky to have worked at Berkeley because there is so much archaeology; no matter where you dig, you know you will always find something! He also likes being able to come to such a beautiful part of the countryside, which is home to a historic which contains many period buildings. Dan says being part of Dig Berkeley has "been a real journey". To Dan, Berkeley means contentment: "I feel fuller here than in Bristol".

Assistant Dig Supervisor Max reflected on the three years he spent as part of the Dig Berkeley project, describing it as a fulfilling experience which has left him feeling prepared for the world of professional archaeology. He says his best memory was when he took part in the GPR survey that was carried out inside the Church of St Mary on the Castle grounds. As a result, he managed to develop a deeper understanding of surveying skills. Max enjoys being able to work at Berkeley because it covers a wide variety of eras, such as Roman, Norman and Tudor. He also enjoys when an occasional modern day find is discovered on site. Max thinks that the most important thing that he has taken away from his time at Dig Berkeley is preparation for the work place. He praises the dig as a training excavation which provides its students with "the foundation for future careers". For Max, Berkeley means getting to do good work with good people.