Slag is one of the most common finds we have on site at Dig Berkeley, alongside animal bones and pottery. Slag is the waste material that is made during metal production and is usually found in the form of shiny irregular black lumps, as shown below. Natural metals occur as ore and have many impurities, such as oxides and silica (sand compound), as well as additional metals that are mixed in. During smelting, these impurities separate from the main compound to produce slag. Slag can look a lot like glass, and as a result in ancient times people used to melt it down to make jewellery. 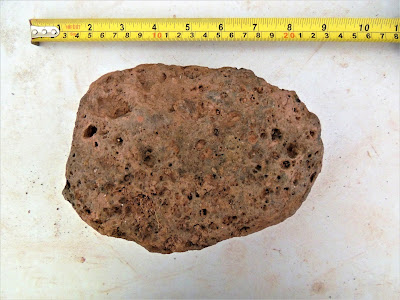 In the South West, slag was most frequently formed from the production of copper ore, most notably from North Devon and Cornwall. Bristol was a key pioneer in the copper smelting industry around the late 17th century, second only to London, as it had easy access to copper ore, which guaranteed its success. Later, during the 18th and 19th centuries, copper smelting spread outwards from Bristol towards Wales and further into England.

In the 1960s, archaeologists found that slag was utilised in the construction of Northgate Turnpike road in Gloucestershire. The findings show that slag was used on the road from 1768 until at least 1782 (Spry 2003). Around 1750, the aesthetic potential of slag was recognised and it started to be utilised as a building material. Simultaneously, this meant that the waste material of copper production was being recycled. Crew’s Hole appears to be the predominant source of slag in Bristol during the 18th century and the Black Castle in Arnos Vale is a classic example of slag being used in construction. There is debate about whether it was designed by William Halfpenny or James Bridges, but it is believed to have been built around the year 1745. Aside from big, impressive buildings, slag was most ordinarily used in the villages and towns that lined the Wye and Severn rivers.

At Berkeley, there are a few places where slag blocks have been used around the castle. The current Estate Office, which abutts Thorpe Tower, may be relatively small but sports an array of slag blocks as decoration around the doorframes and window arches as well as on the corners of the building. These are known as quoin stones, and are shown in the image below. The date of construction for this building is open to debate; some sources believe it was built in the 1760s, but others date it closer to 1806. 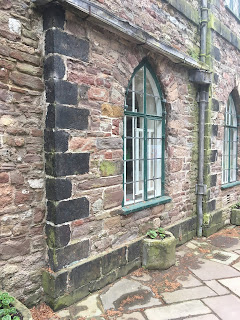 The wall surrounding Nelme’s Paddock – the location of our Trench 8 – is decorated by blocks of slag, which run along the top of the wall that encloses the paddock. These blocks have been poured into a mould in order to produce a building material that is guaranteed to be of uniform size and shape. As slag is characteristically heavy, lining the top of the wall with it helps hold the rest of the wall firmly in place. Despite this, over the years there has inevitably been some need to replace parts of the boundary wall-tops. As slag blocks are no longer produced in this way, they have been substituted by similar shaped blocks of stone at irregular intervals along the wall. This can be seen in the picture below. The production of these slag blocks can help us date the surrounding buildings. 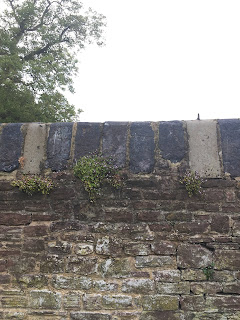 Additionally, slag has been frequently found throughout all our trenches on Dig Berkeley. Interestingly, there is no specific context type or time period in which this slag is found; it seems to be spread across the ages. This was certainly the case with Trench 16, excavated from 2012-13 in the Jenner Garden, which contained an abnormally high quantity of slag, but was spread throughout the deposits excavated. This type of industrial waste is generally irregular in shape and varies in size, from 0.5 centimetres to over 20 centimetres wide. The slag found so far in Trench 8 is mostly from ironworking but the precise location of the original smelting furnaces is as yet unclear.

By Gabija Ulkytė and Tatiana Dowley