The principles of archaeological illustrations are to keep a detailed record of an artefact or  monument, and to provide a representation which other archaeologists who do not have access to the artefact can use for further analysis. Collating drawings of different types and forms of artefacts, for example different types of pottery, can be used by archaeologists to aid in typological dating (dating an object by its style or design). Because of this, it is important that drawings are as technical as possible, well measured, and show the play of light and shadow on the artefact to give a three dimensional effect.

Despite great strides having been made in the quality of photography in the last 50 years, illustration is still a useful archaeological technique. Even though photographs show a clear representation of an object, they do not always show relevant details that can be lost in a photograph but caught by the eye of an illustrator, like areas of wear on leather or metal, the effect of shadows and light on an object, and texture. In addition, illustrations can incorporate details from many different angles into one drawing, rather than needing to take a series of photographs to show different angles. Details obscured by coloured areas of an artefacts are also more visible in illustrations, which are black and white as standard. Often, both photographs and illustrations are used alongside each other in publications, so both colours and details are visible to readers.

The practice of archaeological illustration should not be confused with reconstruction illustrations, such as those of Catalhoyuk or the illustrations of John G. Swogger. Reconstruction drawings are used to give an idea of how certain monuments, sites or artefacts would have looked when in use, rather than an accurate representation of what they look like now.

At Dig Berkeley, second-year student Julia has been working hard on some fantastic illustrations of artefacts included in our exhibition. 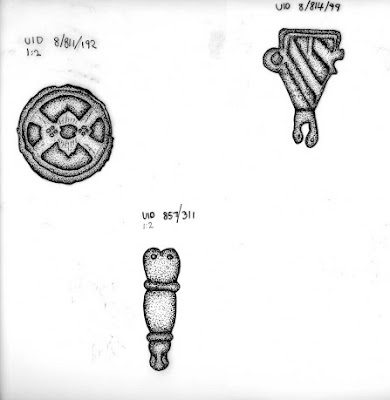 She has also previously drawn a fantastic dagger from the Bristol Museum and Art Gallery: 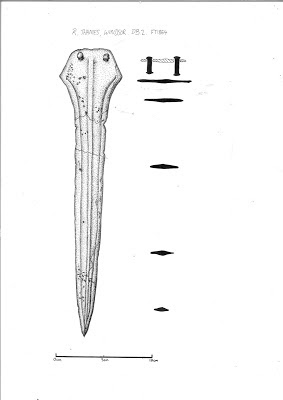 When asked why she chose these particular artefacts, she said that she wanted to draw the Berkeley family glass seal because its details are hard to see when photographed. She also chose the harness pendant and the strap end, because they were beautifully detailed small objects, and enjoyable to draw. All of the drawings above are drawn at 1:1 scale.