Welcome back to Berkeley! This will be the fifteenth and last season of digging at Berkeley Castle. As always, the first day involves a lot of cleaning and sorting for the second years. Muddy Work! Luckily, the sun has come out to greet the eager first years who were taken on a tour of the grounds and the castle by Dr Stuart Prior. They would have had classic Berkeley facts dropped on them such as the castle being the longest residency occupied by the same family in the United Kingdom.

This year we are finishing off the excavation in Trench 8. On the east side of the trench, we are removing a pink hill wash clay layer to unearth potential pre-medieval or geological features. On the west side, we will be looking at medieval and post-medieval features and an earlier ditch. The western end of the trench is full of stone structure such as wall foundations and drains. All these features will be investigated in order to build up a picture of what was once there and how the site has changed over time. 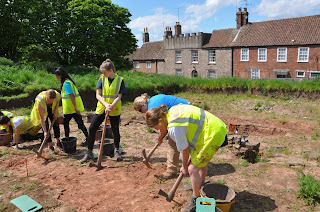 The clean-up is underway!

Archaeology is not all about the digging. There will also be geophysical surveys carried out. The area north of the trench has previously been investigated by using resistivity and magnetometry surveys. This year we have ground-penetrating radar letting us do a more detailed survey of the area north of the trench and in the castle as it allows us to detect subsurface structures. Magnetometry survey will be also be carried on the fields to the south and southwest. 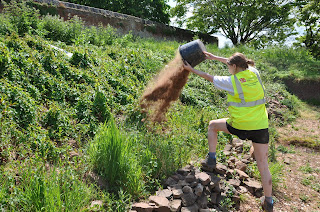 Grace getting rid of some spoil

This excavation is not only a chance for Bristol University’s archaeologists to get involved with the history of the site – you too can get involved! Follow us on Facebook, Twitter, Instagram, and Tumblr. We will be bringing you fun archaeology facts, interviews from students and photos from the dig. There will be posts everyday so make sure you come back for more.