Posted May 22, 2019
Yesterday one of our students, Meaghan Rowe, made an interesting discovery- a bit of clay pipe with "RB" engraved on it! It was found in the cleaning layer so it is difficult to date it but it might relate to the Tudor period as it was near a Tudor period pub. In addition, the clay pipe bowl seems to have been quite small and has no intricate decorations without the inscription, meaning it must have been used relatively close to the introduction of tobacco in the 16th century. Since the import was very small, the substance was very expensive so the pipe bowls were rather small. The pipes were quite fragile yet cheap so people replaced them quite frequently.

The clay pipe has a heel bowl, meaning there is a rather wide circular feature at the base of it and the engraving in on the heel. A mould seam is also visible near the heel, meaning the pipe was not one of the earliest ones as those were made by hand but rather was produced in a mould. The engraving is also called a heel stamp and is made by the maker of the pipe. The heel stamps were used between 1580 and 1730 and the earliest stamps were symbols rather than initials, which helps to narrow down the date as well. The stamp is very useful and helps to determine not only the location but also the maker and the time period. 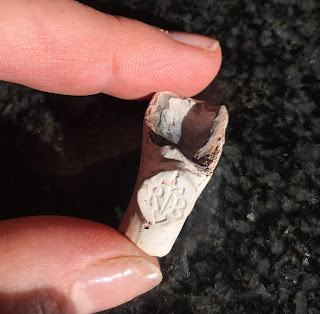 This specific stamp was used by Richard Berryman (or Burman), who arrived in Bristol in 1619 with his wife, who was also a pipe maker. They were part of a charted guild and were the first ones to take on an apprentice in the city. Richard Berryman died in 1652, narrowing down the date of the pipe to a span of 23 years as his life and occupation before he came to Bristol is unknown. The pipe then made its way up to Berkeley where it was discarded and spent hundreds of years in the ground before seeing the light of day again. 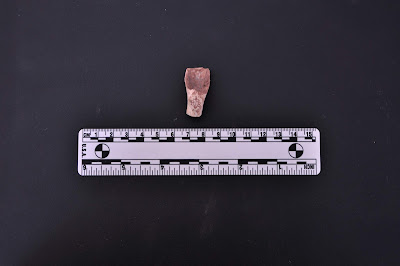 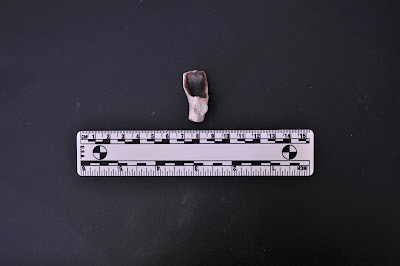 Higgins, D. 2017. Guidelines for the Recovery and Processing of Clay Tobacco Pipes from Archaeological Projects. National Pipe Archive. The University of Liverpool.