Posted June 13, 2015
Archaeologists really get excited about pottery, and here at Berkeley we've recently become excited about a piece of Severn Valley Ware that was found last week. This particular type of pottery was produced at kiln sites all along the valley of the river Severn, including at kilns located close to Berkeley. This particular sherd is a little unusual as it's the foot ring of a vessel fashioned to be re-used as a pot lid.
Severn Valley Ware was produced and distributed in Britain from the second to the fourth centuries A.D, and we found ours in a context underneath a Saxon building. However, the re-use of this vessel as a pot lid means that its life span has been extended and it may well have continued in use into the Anglo-Saxon period. It's a distinctive type of ware which is orange or red-brown, produced along the middle Severn Valley, and distributed across Western Britain. It's usually fine textured, burnished, wheel thrown, and the thicker examples might have grey colouring in the middle. It is also often decorated in linear or lattice decorated zones.
The ware is unusual in that although the pottery adheres to a common tradition in form and fabric, it does not come from one industrial complex, but rather from 'a diversity of small producers'. The reason for this is related to why the wares emerged. P.V. Webster in his article Severn Valley Ware: A Preliminary Study, says 'the early Severn Valley potters were clearly catering for a mainly military market'. He attributes the emergence of this type to the pre-Roman ceramic tradition in the area being less developed than elsewhere, and so a demand being created when the second and twentieth legions moved in to fight the Silures. A mixture of potters with continental, native and Roman influences, some possibly following the legions they were working for from the South-East of England, began to cater for them. When the legions moved on, civilian demand from the increased prosperity of the area allowed the style to continue to flourish until the fourth century. After this the style disappears, albeit not all at once, and Webster notes the correlation with the troubled period AD 347, and that many of the kilns were in vulnerable rural areas. 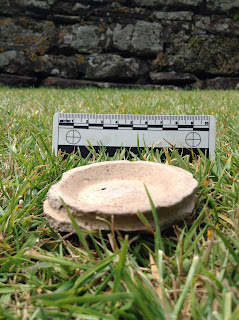