Posted June 01, 2015
We mentioned last week that we discovered a new pit at the top end of our trench and we can now report more because of the collective genius of Site Supervisors Sian and Emily.
The story unfolded when students were doing some routine trowelling and discovered a change in soil colour, very unlike the typically reddish-pink clay expected at Berkeley. This soil was a dark grey-brown. Memories were cast back a couple of years to when another pit, situated above this, was excavated. It was thought that this change in soil may be the very bottom fill of the pit that had been excavated a couple of years prior. 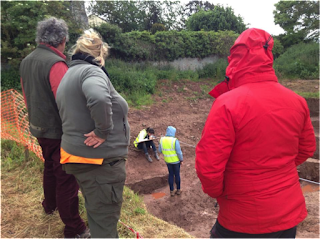 Emily and Sian, being the meticulous people that they are, decided to confirm their theory. Their investigation involved double-checking the records and plans that have been carefully stored for eleven seasons. They quickly came to the conclusion that this was not feasible and that this was in fact the fill of a new pit, not previously seen.

Last week we reported that we discovered a piece of Ham Green ware pottery (interestingly, not always green). This discovery nearly complicated our understanding of the trench as this pottery dates from the 12th Century to the 14th Century, which is firmly medieval. However, these pits cut through a ditch that is thought to be Late Saxon to early Norman in date and for a while the pottery was thought to have been recovered from the upper fill of the ditch. The collective genius of Emily and Sian worked out that this pottery came from this new pit rather than the previously excavated pit or the Saxo-Norman ditch below. 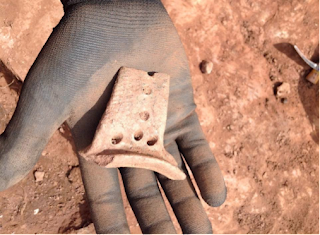 Ham Green Ware pottery
This dates the pit and means that it is Medieval. With that in mind, the next stage of the puzzle was function. What on earth was this pit used for?

The gaze of Sian and Emily turned back to the soil. It is very dark soil, which means it’s full of organic materials. They began to theorise in conjunction with an examination of the High Street as a whole. Since our pits are Medieval they had a look at some of the houses on the road and the way that they were laid out, as the modern houses are built on the foundations of their Medieval predecessors. This pit would have been located at the very back of the croft plots (Medieval houses were built at the front of long strips of land to allow them to keep animals and grow vegetables at the back of their houses). In the image below, we have taken one of the houses and associated croft plot (now the gardens of the house) on High Street and flipped it over to the other side of the street. The star marks the location of the pit that we discovered and it fits perfectly with the bottom end of a Medieval croft plot.

High Street in Berkeley
The current theory is now that this is a rubbish pit that would have been at the bottom of a Medieval garden. This pit would have been away from the domestic activities of the house and far enough away to act as, essentially, a rubbish bin.

Now we've found the rubbish bin, all we need to find are the Norman houses that go with it!