Posted June 18, 2014
So this is it: the end of the 2014 Berkeley season and what a year we have had. This has been a year of discoveries, re-interpretations and, as per usual - fun! 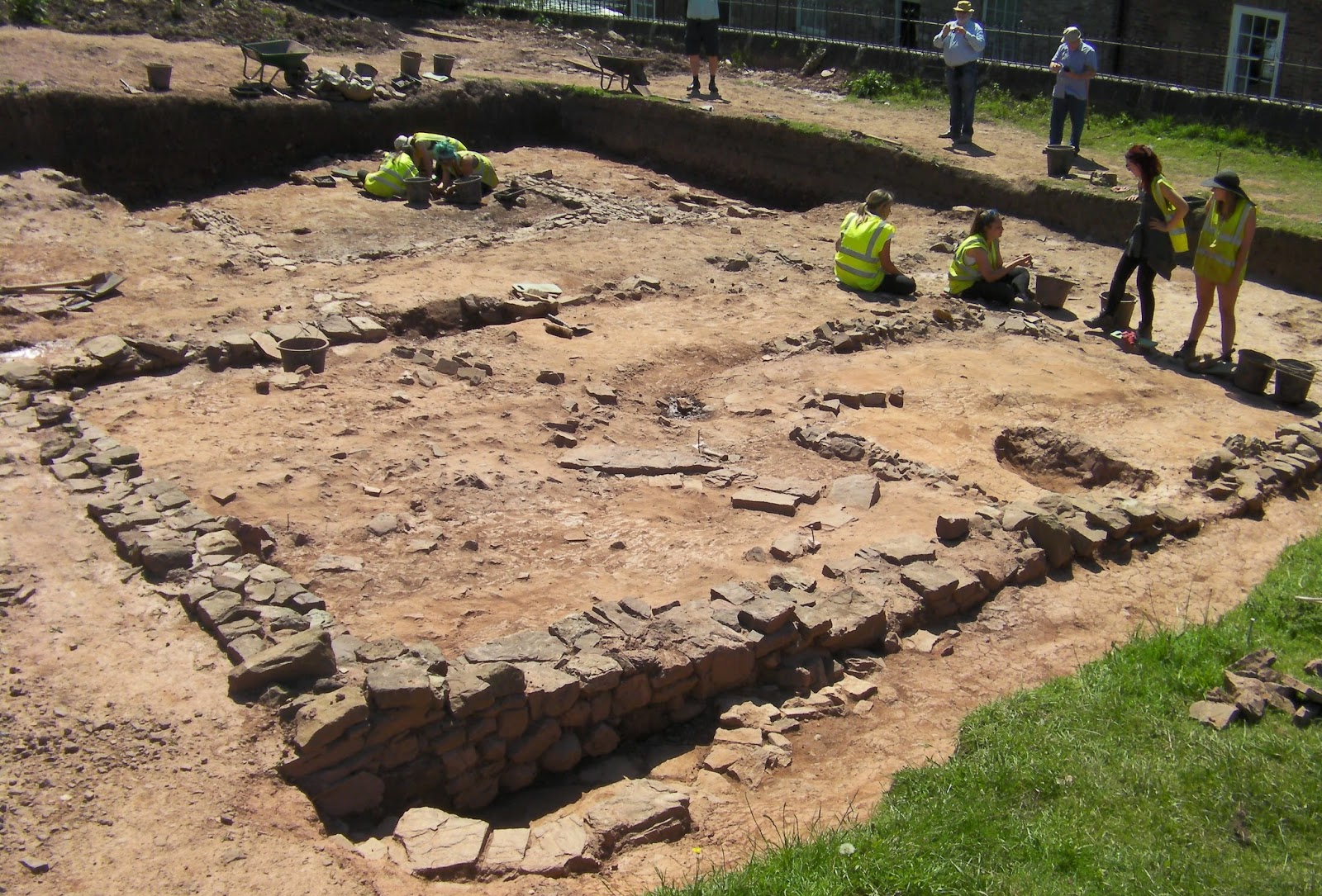 The main trench in the Paddock - Trench 8 has seen enormous progress on all four corners. At the High Street end of the trench we appear to have uncovered the remains of a Tudor tavern out-building. This building, along with the tavern (that we believe is somewhere under the spoil heap), appear to have been destroyed during the civil war to defend the castle from attack by creating clear lines of sight. Pits that were dug inside the out-building contained, amongst other things, industrial waste which makes us wonder whether this may have been a light industrial area attached to the tavern? We look forward to further excavating this area next year to see where this takes us and are enormously thankful to our students who have, in this space alone, moved over a tonne and a half of mortar, brick and building material in order to uncover this structure.

Also at the High Street end is the ‘Norman House’ - which is no longer Norman after the discovery of Tudor pottery underneath one of the walls. This certainly threw the cat amongst the pigeons! The dating material from an adjacent building seems to indicate now that this is a Tudor or later extension to an earlier, possibly Saxo-Norman building. One wall of this earlier structure has evidence for a drain which may have belonged to a neighbouring house and the relatively thin walls may indicate that this is a half-timber house. Again, we look forward to coming back next year to continue our research in this corner of the trench. 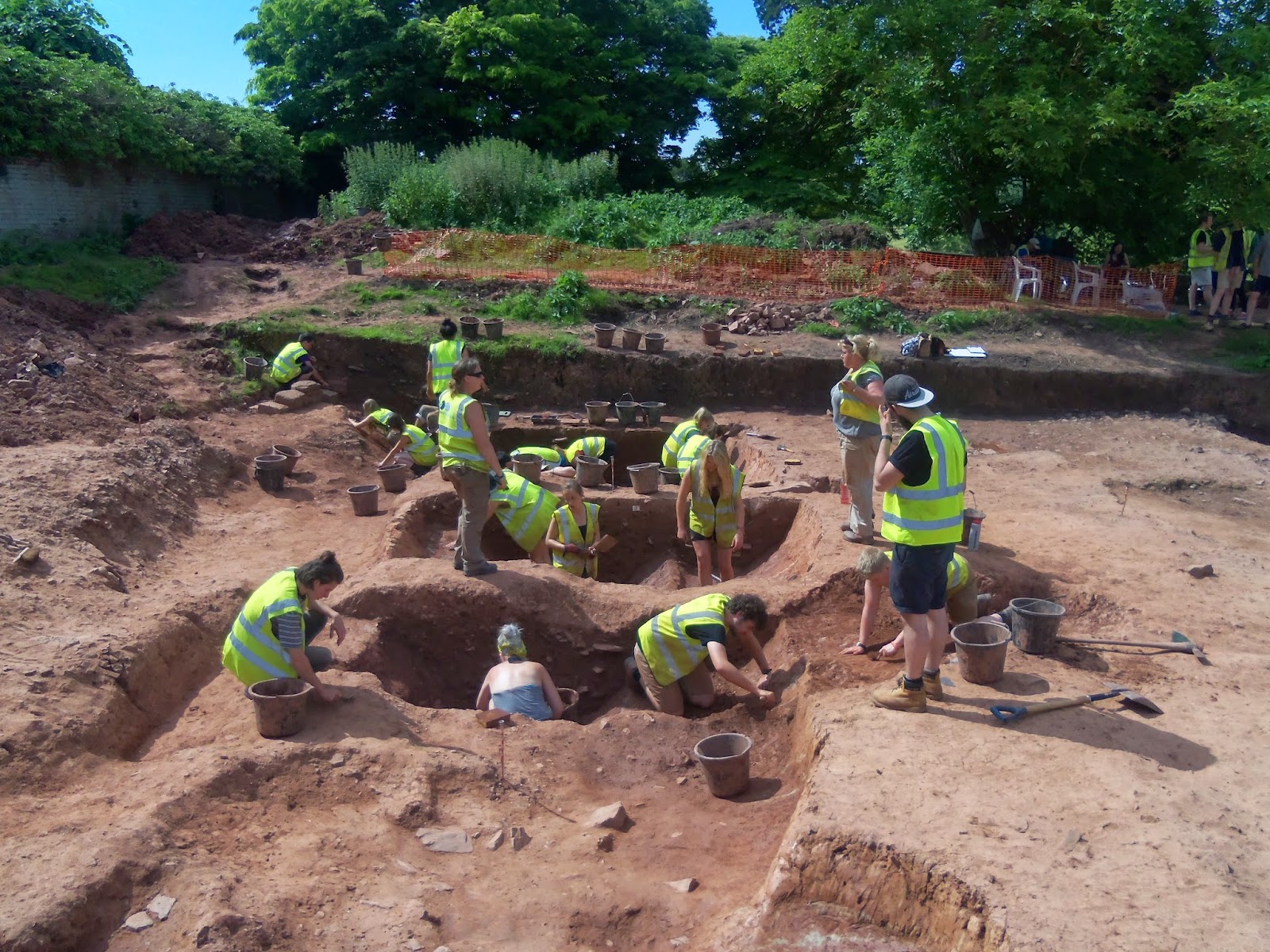 At the other end of Trench 8, we have a series of ditches and pits that have been excavated over the past few years - the complexity of this sequence we are only now beginning to comprehend. The pits appear to be Medieval, from the presence of 12th century pottery and a bronze Medieval strap end, and cut through a 3-ditch sequence. The central ditch of this sequence measures about 2m wide with a bit of an ankle-breaker base which makes us think that this one was constructed for defensive reasons, whereas the other two are much shallower and may have been for drainage or delineate a boundary? We think that these ditches range from Saxon to early Norman in date due to the presence of a Saxo-Norman rim sherd in the large, central ditch. Overall, there is a high density of truncation by intercutting features across this area, indicating the high level of human agency that occurred. 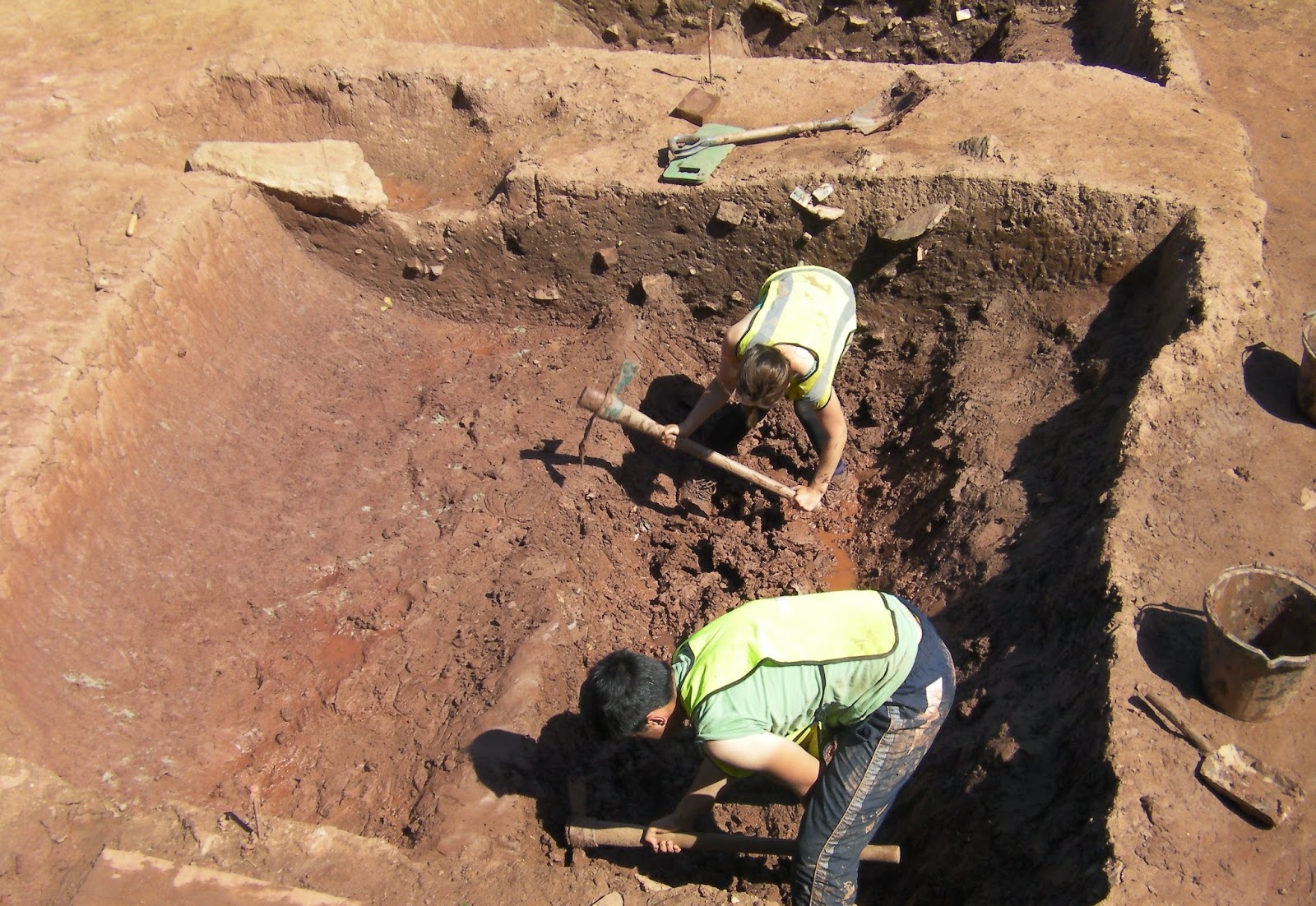 In addition to the progress in the paddock, students from the University of Bristol, led by Jack Fuller, have produced exhibition pieces for the Jenner garden and Museum and for Berkeley Castle. These exhibition pieces display finds and interpretations from the university’s excavations over the last ten years. The Jenner exhibition opens to the public next week and the Castle’s exhibition will open during Berkeley’s Festival of Archaeology which runs from the 12th-16th of July.

University of Bristol post-graduate student Jim Pimpernell has continued his PhD research into the development and evolution of the tenancy of the Berkeley estate and works closely with the castle utilising their fantastic archival collections. 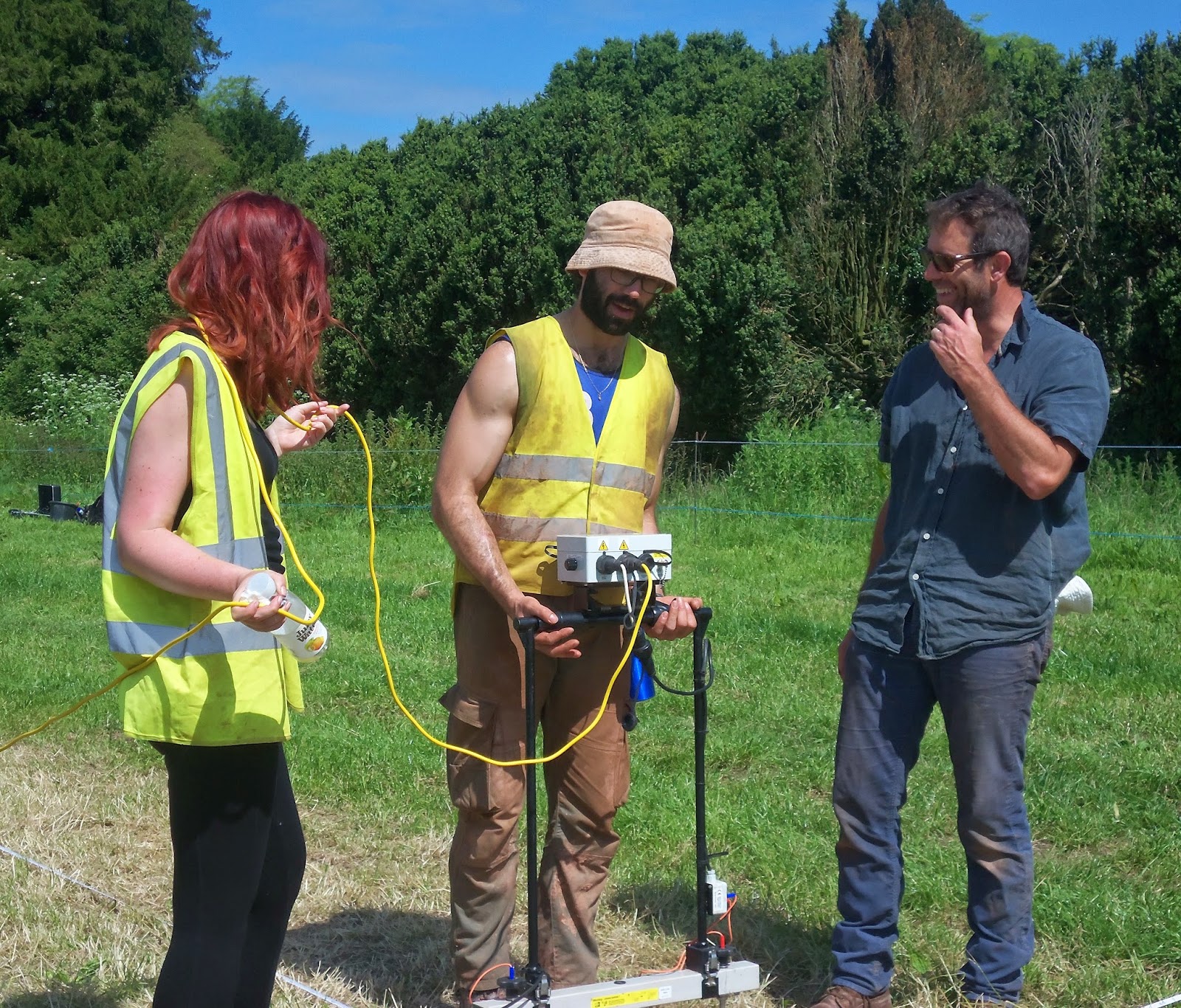 We finish this year as we started with a geophysical survey. The weather was significantly better than it was in weeks one and two, so results were much improved with potential for research in future years.

And finally, all is not completely over for 2014! We have the Berkeley Summer Field School happening in August. So keep on coming back for our exciting updates. Thank you, and good night. 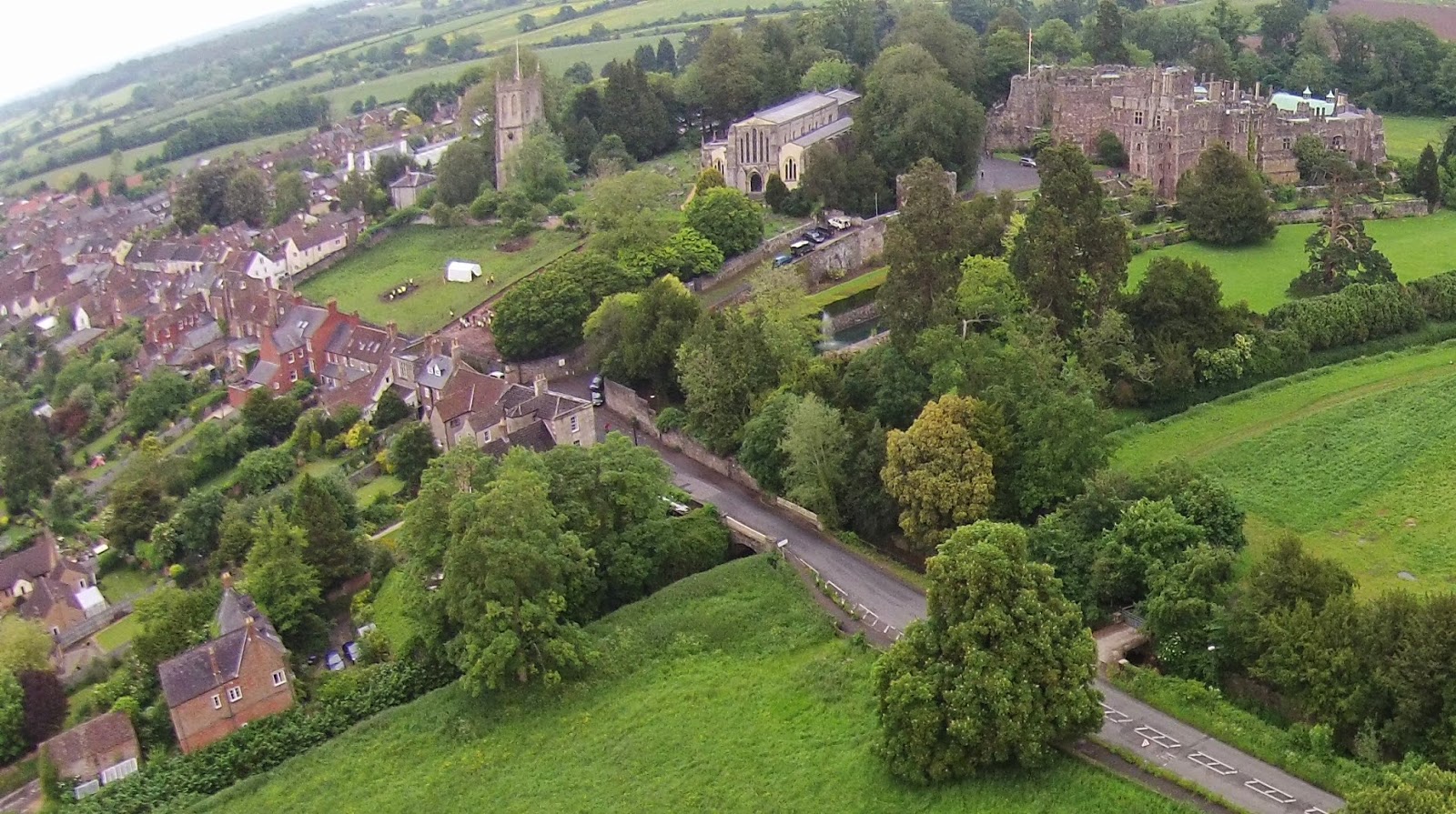