Posted June 03, 2014
Over the last two weeks of the dig a brick-built Tudor building was discovered in the south west corner of Trench 8, which was demolished pre-1645 during Civil War action. Examination of the historical records in Berkeley castle has led to the identification of this building as a Tudor tavern which was called ‘The Crown Inn’. There are references to this Inn in the 17th Century and the building dates back as far as 1544 where it is noted in a survey. Over the last two days work has been done to remove the remains of this building to access the layers underneath, work being led by second year student Sophie Rose, and in the last few minutes a floor has been uncovered.

Third year student Isobel Bentley has been overseeing work in the east end of Trench 8 on a series of boundary ditches of possible Saxon date. The main aim for this group of eleven students currently is to discover some pottery or other easily datable pieces so that the phase to which the ditches belong can be securely established. So far there have been no discoveries; however work on the central ditch to reach the natural layer is appearing promising to help us understand more about this area. 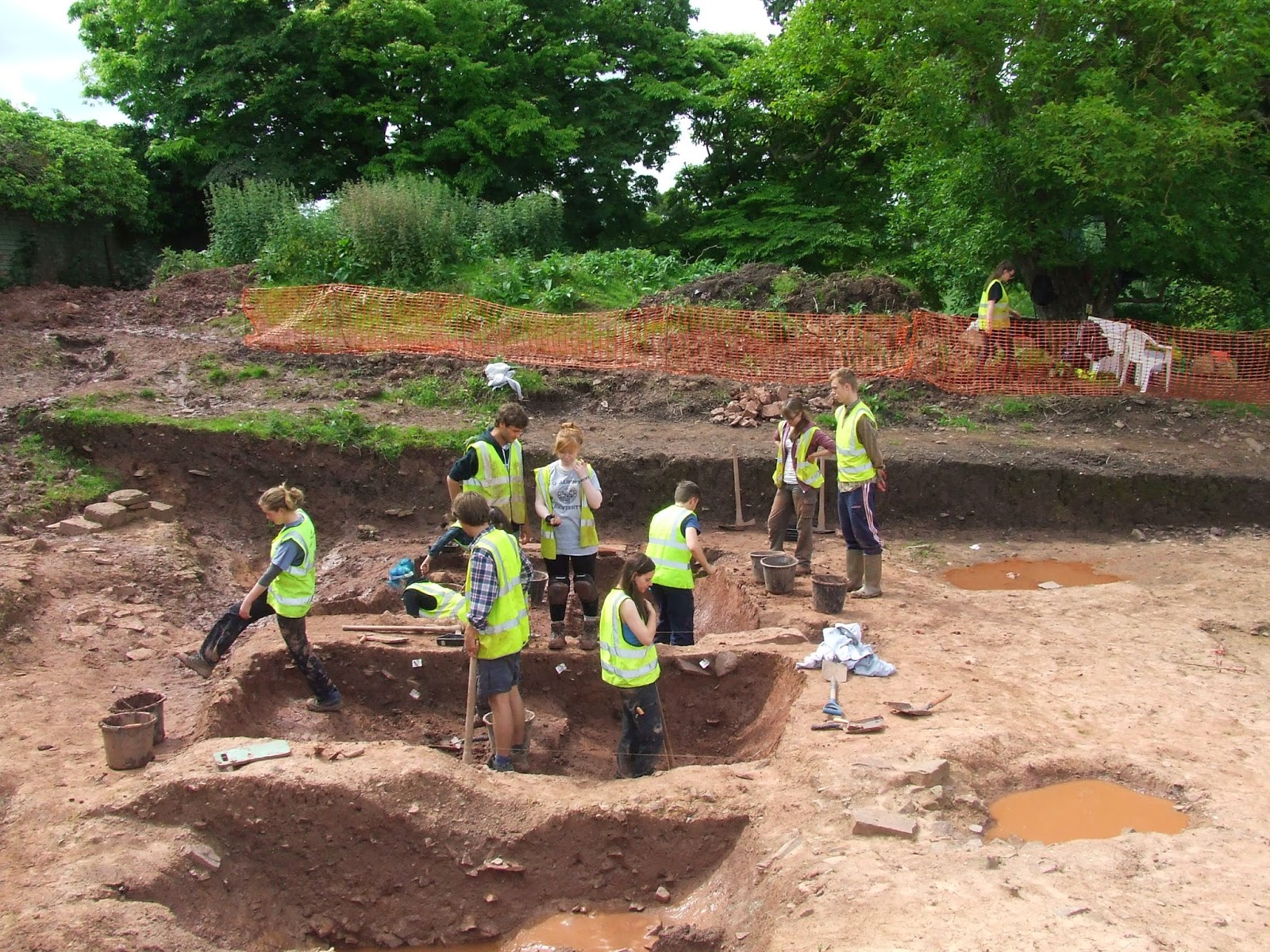 The North West corner of the Trench has seen multiple phases of building.  The one currently under excavation is suspected to be of Norman origin, contemporary with the construction of the castle in stone (1160-70).  Close to overlaying this there was a medieval building of the late 13th to 15th century which was excavated away in the earlier years of the dig.  Adjacent to the Norman building, Paddy, a first year student, discovered what appears to be either a well or water tank alongside the north wall. Owing to the location of this feature it is hard to determine whether it was built alongside the Norman structure or whether it predates it and, until this feature has been further investigated we will be unable to date it effectively , however this again provides us with something to look forward to across the next two weeks! 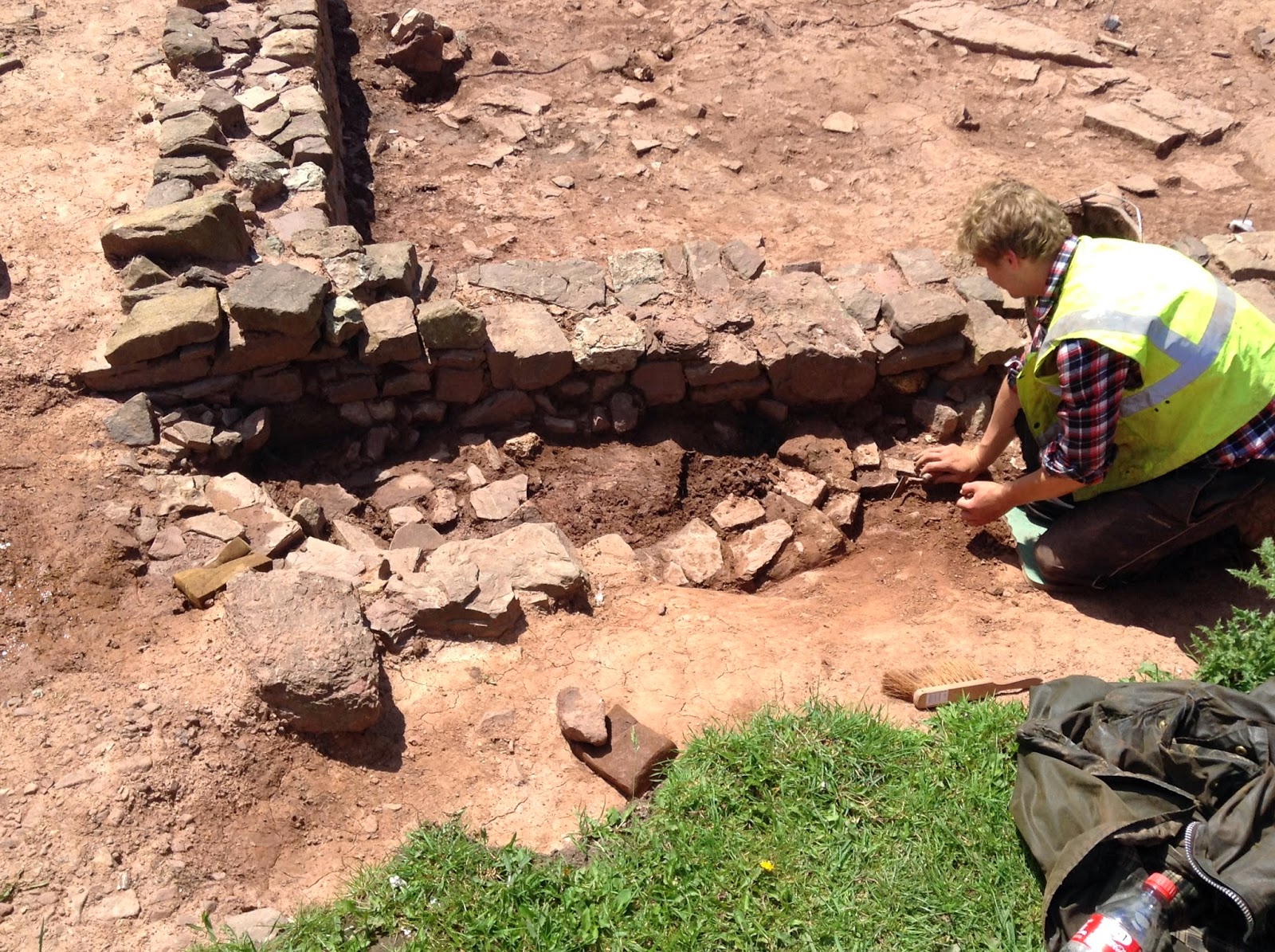 Community archaeology has been on the rise over the last couple of years, with communities taking far more interest in in finding out about their family heritage and that of their local area. This interest has led to the University making an effort to welcome the members of the town into their work by providing information around the town on the work that is going on both around the town, on the site of the castle and through various social media sites, such as Facebook, Twitter and Tumblr, links to all of which can be found at the bottom of this post. Furthermore the community has been welcomed into the work with artefact handling opportunities available onsite, a temporary exhibition being set up in the town and student tours being offered, the next of which is happening on the 4th of June.

The benefits of getting the local community involved in the site has not only helped us to get them engaged with their heritage but it has also benefited us greatly in that the people from Berkeley look after the site while work is not being currently done, as they check that there are no night hawkers breaking in, which is an issue which has occurred multiple times in the past.

If you have any ideas for how to improve our relationship with the local community, please contact us either via our email address, bristoldigberkeley@gmail.com or via another of the social media sites listed below.

The last two days of digging have been exceptionally productive and provided much information about various areas of the site and, more importantly, provided us with many more points to excavate over the next two weeks!