Posted June 07, 2017
Last week, the excavation received a visit from the Lansdown poetry workshop, an informal network of Bristol-based poets who meet once a month in The Lansdown, Clifton. The tour was organised by recent Bristol graduate, Robert Beavis, to provide an educational and inspiring experience, in the hope of stimulating creative responses to the academic environment.

Poetry can be can be used to reflect on the past, much in the same way that archaeology provides us with a physical interpretation of history. There is also a romanticism to archaeology, in the ruins of buildings or holding an artefact for the first time in hundreds of years, that can be seen in many poetic styles. Robert wished to highlight this and inspire the visiting poets to create their own artistic interpretations, influenced by the excavations at Berkeley.
As part of the tour of the site, Robert showed the poets archaeological artefacts from previous seasons at Berkeley including Gloucestershire slip ware and worked flint. Robert used poems from the Classical era to the present day as the basis for discussions of taphonomic (the study of processes, such as burial, decay and preservation) processes, materiality and temporality (existing within or having some relationship with time). These are themes present in poems such as Heaney's work, 'Grauballe Man,' or the Roman poet Lucretius's De Rerum Natura.When asked which elements of archaeology they found the be the most interesting many of the poets, such as Tim Burroughs, noted the paradox of archaeology - the destruction of history to better understand and record it. Martin Rieser also commented on the artefacts and layering of history in the trench. Some, as will be seen, were interested in the notion of 'the uncanny,' while others have been captivated by the reality of past lives that archaeological excavation can bring to the surface.


Over the next few posts we will be sharing poems written by the Lansdown poetry workshop that were inspired by the excavations and archaeology of Berkeley. Some of these poems are still in draft form; they will be subjected to their own complex processes as they are reworked and rewritten.

Keep checking the blog over the coming weeks for even more poems!

Excavation
The ground is hard, halfway to
Stone, packed safe round stone,
its secrets kept,
Layered away from curious eyes.


Flow has no place down here
in another time,
Meaning no validity. These
Things simply were, these black sherds
where the earth
Cradled them. Exposed to rain and measurement,
Trowelled up, a sacred confidence
has been broken:

The long concealment of walls is violated
With tools, with hands, with novel thoughts,
for unwanted scrutiny.

BERKELEY CASTLE REVISITED
It begins in the ritual of meeting
In the car park (Late Automotive Age)
Early spider webs catching the sun
The movie trucks are gone
But I’m still here like a ghost
Visiting a pasture of ghosts
I was a leper here
And I was a dead man in the dry moat
Covered in muslin and dust
I smell the ghosts of smoke machines
I was English Irish French and Cornish
I was a contractor for Disneyland
We walk through the churchyard
The inscriptions disappearing
Rome reappearing in sherds of Severn Valley ware
Bullet holes in the church doors and pillars
Uncanny air in the pasture below the church
Where an army of archaeologists swarms in the great trench
We come to the tent of finds / above Coenwulf’s Anglo-Saxon silver penny (c800)
Coins from Elizabeth I and Edward III A perfect iron arrowhead from the 14th century
Neolithic flint and medieval tableware
Slipware greyware black-burnished ware
And an Aestle: a ritual pointer
Not like King Alfred’s Aestle-jewel
This is a humble monk’s pointer
For pointing at a book of jewels
And a whetstone neck pendent
A beautiful beveled scribe’s tool
With a hole for the leather lace
A whetstone to sharpen the pen knife
Used for cutting goose quills
The pages are missing but the footsteps continue
An archaeologist points with her trowel
To the rocks of the inner outer walls
In this trade of pastures plans and sections
The plague is buried here
Along with smallpox
Milkmaids don’t catch smallpox
Ask the hut / below
A little bit of knowledge
Is a visionary cosmos
Even the grasses know New Worlds
The artist installs ghost deer in the game larder
Whiter than the fog of early hunting
And again I’m the ghost in residence
Archaeology is like a poem
That is never finished
Poetic closure only infill
Some day we will be the ghosts
And thrill the visitors of this changing landscape
So completely changed by time and music
Oh look what they have found
Freed from the red protective clay
A rare undamaged communication device
No just a stainless steel wristwatch from 1951
Blinking again in the footsteps of the pasture
Days later it’s raining and the trench will be slick
But I’m sleeping with the spiders in the rain
- Tony D’Arpino 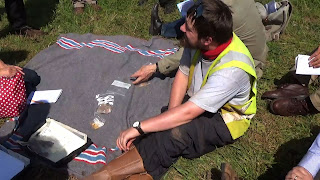