Posted May 17, 2016
There's lots in store for the Berkeley crew this year! The team has been going at break neck speed; cleaning the surface of the trench. Section edges are being polished off, photographed, and drawn meticulously. This is all in preparation for an exciting new extension to the western side of the trench.

We hope to uncover some pre-14th century (possibly Norman) buildings. These have been hinted at through the discovery of what might be drains and walls. This would further enrich this already dense site, so fingers crossed!

The extension might even uncover the old path of the Berkeley high street. The theory is that during the building of the wall that currently forms the boundary between Nelme's Paddock and High Street, the Berkeley Estate may have encroached on to High Street, effectively making the area of the paddock larger than it should have been. This would explain why the wall curves and does not match the alignment of buildings further up the road. 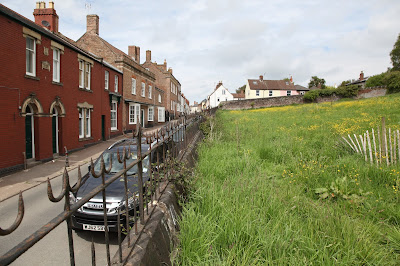 This would not be the first time the paddock extended its boundaries. A few years ago a row of skeletons was uncovered on the eastern side of the paddock, overlain by the wall. This wall separates the paddock from the graveyard surrounding the church. The fact that the wall was constructed over the top of graves indicates that land owned by the church had been incorporated into the Berkeley estate. Perhaps something similar has happened on the western boundary?

We also have our first Roman find of the season! This took the form of a Grey ware sherd, possibly from a beaker (pictured below). This might support the current interpretation that a row of stones, running north-west to south-east through the trench may represent a Roman building. We look forward to more exciting finds!