It’s finally come around! The Berkeley Castle excavations are back for another year and we have just started our first official day. We are beginning to get back up to speed, our 1st years have been given their obligatory tour of Berkley Castle and are now back in Nelme’s Paddock de-weeding Trench 8. During the clean, our Archaeo-metal detectorist Pete Twinn found a weighty lead spindle whorl dating to the Medieval period. This came from the building complex that fronted onto the High Street, however until the full clean-up has finished we are unclear which phase this find belongs to.  A spindle whorl is a disc of spherical object that is used in the spinning of cloth. It fits into the spindle and acts as a weight to increase the speed and constancy of the spin.

The logistics of running a project of this scale are of course significant, but experienced hands make easy work. Sian and Emily are back for another year and the show is back on the road. There are some new challenges to be overcome, most notably the lack of our department’s iconic Land Rovers and the explosion in the local nettle and thistle population of the Paddock!
More excitingly we are sharing our Social Media HQ with an unnamed BBC production (it may feature Henry VIII, #nospoilers #notWolfHall). Despite the sad absence of Dr Stuart Prior from the dig (get well Stuart) the excavation will soldier on. This will be our 12th season working on archaeology in the town of Berkeley (the excavations started in 2005) and we have been digging our current trench since 2009. 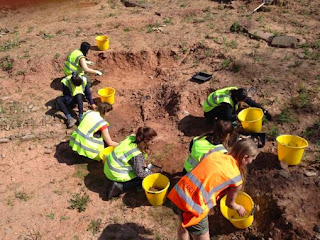 The story so far! Previously we have uncovered some hints of a Roman presence in the Paddock in the form of a thin pebble surface, which has now been removed, and Roman masonry reused as foundations for an Anglo-Saxon building. As we will now be excavating the layers below the Saxon building, we hope to update you with more definite evidence soon!
Stay tuned for further updates and another productive dig season.

“Coffee is the key to success” Sian, #BerkeleyWisdom2016