Showing posts from June, 2013
Show All

What is a Minster? 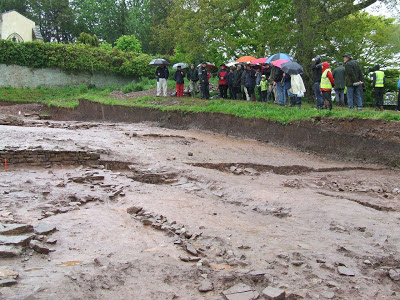 Berkeley’s Paddock trench has revealed more information suggesting the site was a part of an Anglo-Saxon minster. But what were minsters and why are they so important? Visitors view a very wet Paddock trench in Week 4 of excavations Minsters are the forefathers of common English parishes, they were the initial religious dwellings in early Anglo-Saxon Christianity. The first minsters were founded a century after Augustine of Canterbury’s religious mission to Anglo-Saxon England in 597AD, and they are found in the Royal charters in the seventh century. Anglo-Saxon Kings made grants of land to named individuals, which then found a minster. They were commonly founded by king or royal thegn (or thane), with the primary purpose to support the king and the thegn in regular worship of the divine office. Thegn seal made of walrus ivory showing religious iconography, c.11th century (Source: British Museum 1881,0404.1 ) The word ‘minster’ actually derives from Old English
1 comment
Read more
More posts